What are CIs?Confucius Institutes are educational programmes overseen by China’s Ministry of Education in partnership with Universities, Schools and Academies around the world. The stated aim of Confucius Institutes is to promote Chinese language and culture to individuals in schools and universities.
Why are they a problem?Confucius Institutes threaten academic freedom and free speech by promoting China’s propaganda and censoring issues deemed sensitive to the Chinese government such as Tibet, Taiwan and Tiananmen.
What can I do?Students, academics, parents, politicians and people of conscience around the world have already spoken up about China’s heightened ‘soft power’ push that is restricting academic freedom and silencing debate on human rights and other sensitive issues.

What are Confucius Institutes?

Confucius Institutes are educational programmes in reputable schools and universities around the world. Governed directly by the Chinese Government office ‘Hanban’, the stated aim of Confucius Institutes, or Classrooms, is to promote Chinese language and culture.

In reality, Confucius Institutes are part of China’s ‘soft power’ plan to spread a distorted image of the ‘Chinese Dream’ and to expand China’s influence around the world through the promotion of Chinese government censorship and propaganda, and silencing any discussion on topics such as Tibet, Taiwan, Falun Gong and the Tiananmen Massacre of 1989.

China lacks all respect for freedom of speech and religion and continues to persecute the Tibetan people, who have lived under illegal occupation since 1950; even simply promoting the use of the Tibetan language is criminalized.

By suppressing the truth within our own academic institutions, we are permitting China to influence free, unbiased intellectual debate, and allowing students to be misinformed.

With more than 500 Confucius Institutes and 1000 Confucius Classrooms in over 142 countries worldwide, this is a real and growing threat to our academic freedom and democratic values – and we cannot ignore it.

Students, academics, parents, politicians and people of conscience around the around the world have already spoken up.

“Confucius institutes are an important part of our soft power. We want to expand China’s influence. This relies on our instructors, CIs and language”

Why are they a problem? 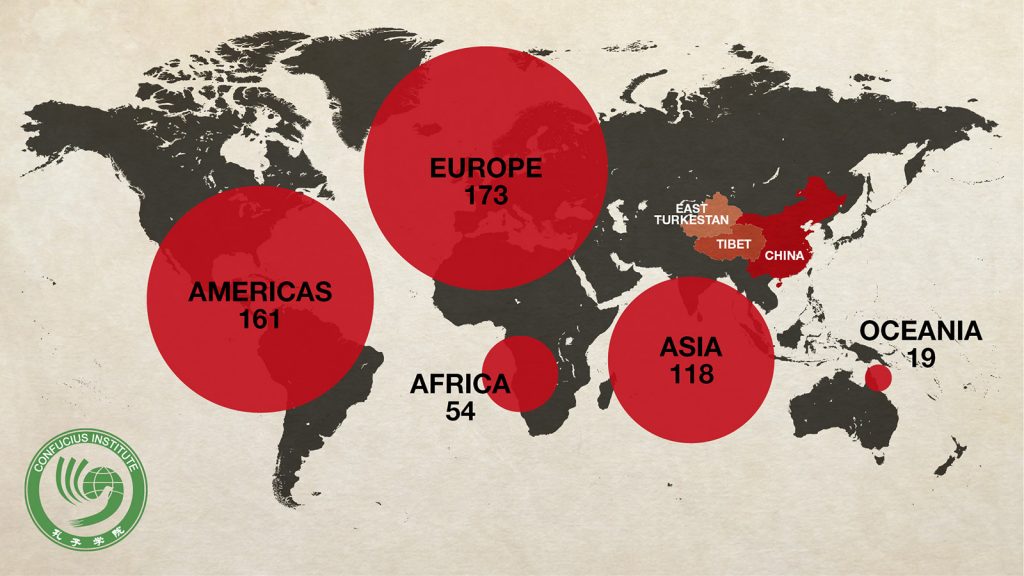 The Confucius Institute programme began in 2004. There are now over 500 Confucius Institutes in dozens of countries across six continents; the highest concentration of Institutes is in Europe and the United States. China’s Ministry of Education estimated in 2010 that 100 million people overseas were taking part in CI learning. The Chinese Government aims to establish 1,000 Confucius Institutes by 2020. At least 24 CIs in the US have been closed due to concern for academic freedom and censorship.

What can I do?

Join Us – Say No to Confucius Institutes!

We will be adding new campaigns targeting specific institutes,
so come back and add your name to each new campaign

Opposing Confucius Institutes is a campaign that has already had considerable success.
Read more about the latest news and success stories below.

New report claims China’s Confucius Institutes threaten academic freedoms and calls for a review of all current agreements in the UK.

Leiden University will not extend the present partnership agreement with the Institute, which comes to an end on 31 August 2019.

Read the report
We will be adding resources in due course,
so come back and help us promote this campaign
Resources on Google Drive
Copyright 2019 Tibet Network | All Rights Reserved | info@no-confucius-institutes.org | Privacy Policy